These quotes by Mother Theresa and Erik Erikson (who was a very influential developmental psychologist) emphasize a need that many psychologists believe is innate for all human beings: the need to belong.

Throughout history, many researchers and theorists have addressed this human “need to belong”, or the inherent human drive to form and maintain relationships with others.1 Psychologist Abraham Maslow placed “love and belongingness needs” in the middle of his motivational hierarchy (see image below), only after physiological needs (for example, food and water) and safety needs.2 John Bowlby, most famously known for attachment theory, also highlighted the human need to form close relationships, beginning with the relationship between an infant and their caregiver.3 Finally, theorists Edward Deci and Richard Ryan outline three psychological necessities in Self-determination theory: autonomy (one’s ability to make their own decisions and act in accordance with their will), competence (a sense of control and feelings of effectiveness), and relatedness (feelings of social significance and connection).4 All of these researchers and theorists stress that as human beings, we need one another, echoed in the infamous words of John Donne: “No [person] is an island.”5

Because having close relationships with other people is vital, not having them has many negative repercussions. In fact, research has shown that being deprived of belongingness/not having close relationships with others is related to various negative outcomes including but not limited to poorer physical health and mental health struggles (for example, depression, anxiety, stress, eating disorders, etc.).6 Researchers have also found that loneliness has been tied to decreased functioning of the immune system.7

Unfortunately, many AYAs feel as though their needs for belonging and connection with others are not met. AYAs commonly report feeling isolated and alienated, particularly when they miss out on the normative developmental experiences that their healthy peers are sharing.8 Many also struggle with knowing how to talk about cancer with others, further exacerbating feelings of disconnection. In fact, researchers have suggested that AYAs may be at a higher risk for social isolation.9

“Many AYAs feel as though their needs for belonging and connection with others are not met.”

I wish that I had the awareness that this was a common feeling for AYAs when I was first diagnosed and undergoing treatment, because, although I had so much support from my family and friends, I still felt isolated and misunderstood. I remember feeling fundamentally different from my peers, not knowing how to talk to them about cancer without making them feel uncomfortable. I felt like the word “cancer” carried so much emotional weight and fear for them. Like I had mentioned in my previous post, I yearned so deeply to just see another young person in the waiting room as to not feel so abnormal. I remember that some of the most impactful and meaningful conversations that I had after I was diagnosed were with two people whose lives had also been touched by cancer. Although these people were not my age (my mom’s coworker and my friend’s mother) I felt more understood by them. I could feel that they empathized with the fear and confusion I was experiencing.

In one study, researchers interviewed AYAs and outlined various ways in which they felt supported. These include but were not limited to:

As mentioned above, engaging with other AYAs may be especially important for helping an AYA feel less alone. Researchers have found that other AYAs act as an important source of support in that they can understand each other in ways that those who haven’t had cancer cannot.8 Some AYAs have reported wanting to connect with other AYAs who faced similar challenges speaking about their cancer with their family and friends. In fact, more than half of AYAs want to meet other AYAs, but most of them report that this need is not met. It has been recommended by researchers that peer-support interventions be created that allow AYAs to interact with each other in an environment that is appropriate for their developmental stage.11

Luckily, there is good news: platforms exist that are made specifically for connecting AYAs and meeting their various needs! I have included a few resources that I am aware of and short descriptions of each (these links can also be found under the “Resources” tab on my blog). I wish I had known about these resources earlier, I think that they would have really helped when I was feeling misunderstood and alone. They opened the door for me to the AYA community which is abundant in support, authenticity, and resilience. To the other AYAs out there, I hope that they do the same for you. And please, always remember…

You are not alone. 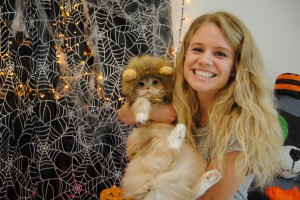 Hello! My name is Ximena and I am an AYA cancer survivor. My mission is to help adolescent and young adult cancer patients and survivors feel more understood and connected.